Meet our Donors – The Herrin Family 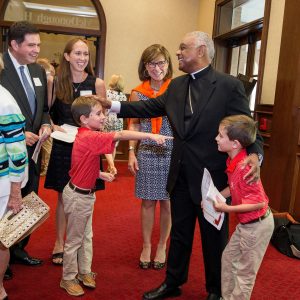 Erica and Brent Herrin have a busy family. They have twin 9-year-old boys – Mercer and Andrew, and a daughter, Sarah Elizabeth, born in July 2017. They were also richly blessed to have given birth to Matthew Isaac on February 15, 2016, who lived only 15 days.

When Erica was 13 weeks pregnant, she and Brent learned that their baby boy had a condition called Trisomy 13. His brain did not form properly and he had severe heart conditions. Being faithful Catholics, but knowing that Matthew was fragile, they started a CaringBridge site and asked the community to join them in prayer for their baby.

The Herrins are members of St. Peter Chanel Church in Roswell, and their boys attend Queen of Angels Catholic School. Their parish and school communities supported them tremendously throughout the pregnancy and loss of their son Matthew.

The Herrin family knew they wanted to remember Matthew in a special way. “One of the things I thought about was Catholic schools,” Brent said. “I serve on the advisory council of Queen of Angels School [and wondered if there was] some way Matthew’s legacy could live on through the school.”

Before Matthew was born, Erica and Brent worked with the Catholic Foundation of North Georgia to create an endowment fund in his name. When he passed, they asked friends and family to give a gift to the fund in his memory. The fund has grown to over $35,000, and the earnings from the fund are now providing scholarship money for children in need to attend Queen of Angels Catholic School.

“If Matthew was still here today, we would have sent him to Catholic school,” Brent said. “We would have been paying tuition dollars for him. There are a lot of families who can’t afford to send their children to school. So why not take the money that we would otherwise have been spending on his education and put it in an endowment fund.” Join the Herrin family in remembering their son Matthew and supporting Queen of Angels Catholic School by donating to the Matthew Isaac Herrin Memorial Fund.

Quotes from a story by Jean Driskell, The Georgia Bulletin, October 6, 2016