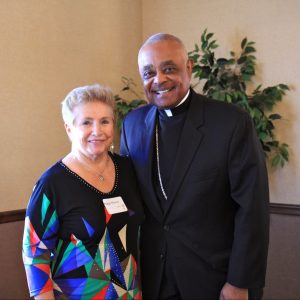 Creating a Legacy for Good

Bequests to a Parish Endowment Fund

Years ago, Peggy Harvey and her husband, Bernard, received a large insurance settlement after he was injured while doing iron work for the construction of a high rise in New York City. The accident left him totally disabled, and the Harveys moved to Vero Beach, Florida where they could access good care. In 2004, after 18 years of suffering, Bernard passed away.

Peggy sought a summer home in a cooler locale and found Blairsville, a community elevated in the Blue Ridge Mountains of Georgia, yet still close to her six children and 12 grandchildren. There she saw a German-style “Hansel and Gretel” house nestled on a beautiful lot along the banks of a mountain stream, just down the road from a church. Before making any final decisions, however, Peggy visited the church to make sure this would be a community where she could thrive. At St. Francis, she met Father Richard Wise, the pastor at the time, and felt a profound connection with his ministry right away.

Peggy has lived in Blairsville for over 16 years and is a devoted parishioner of St. Francis. During her summer months there, she attends Mass every day, sings in the choir on Sundays, participates in Bible study, and goes to the Holy Hour each Monday night. “The parish is the center of my social life,” she says.

One year, Peggy attended a seminar on the spirituality of dying and determining your end-of-life legacy. The discussion prompted a deep reflection on the profound love she had for her husband, and caused her to remember the settlement they had received from his accident. “My conscience was hurting because I wanted to do something with this money,” she said. She marveled at the seminar as an opportunity to honor Bernard and the suffering he endured during the last 18 years of his life. At last, she had found a good use for the money that had troubled her for so long. Peggy named the St. Francis of Assisi Endowment Fund at the Catholic Foundation as one of several beneficiaries of her trust. The bequest provided her with much needed comfort and will benefit the parish community at St. Francis forever.